After the medical evaluation at The Rothman Center, Dot was seen by a neuropsychiatrist. We met first with with another staff member, Dr. Horng, to pinpoint the areas that seemed the most worth targeting, i.e. the behaviors that are causing the most disruption in Dot’s life. Her separation anxiety was right at the top of the priorities list, as well as her inattention when it comes to following directions or remembering to do routine tasks. All the info from this appointment was then used by Dr. Rahman to determine where to start.

We met with him for the first time on June 24th, and he recommended that we start out by working on “compliance.” The reasons for this seemed really obvious once he said it out loud, but was probably something I wouldn’t have factored into the equation if I’d been trying to figure this all out on my own.

When Dot is full of anxiety and is fearful of something, there are two things working against her.

By working on compliance first, we would be helping her to remove the “I don’t wanna, so I’m going to refuse” part of the process. Just ignoring a request or saying “no” to a parent’s instruction would become a much more foreign proposition, and with that option less likely to pop into her head, she’s would “only” be dealing with the anxiety angle, which is something we planned to also deal with later on in the therapy.

To start, Dr. Rahman had me go through what an exchange between me and Dot would look like. I described a pretty typical back and forth between us.

Me: Dot, you need to put your shoes away because someone’s going to trip on them and break their neck.
Dot: (may or may not respond)
A few minutes later…
Me: Dot, I told you that you needed to pick up your shoes. I’m so tired of having to say the same things over and over!
Dot: Okay, okay, I will.
I return to the room an hour later.
Me: Dang it, Dot! PUT YOUR FREAKING SHOES AWAY BEFORE I LOSE MY EVER-LOVING MIND!!!
Dot: (finally puts her shoes away)

I’ve got to say, laying things out like this for a therapist is kind of embarrassing. I mean, I’d love to be a mom who never yells at her kids. But I’m not. To be fair, I keep my cool for a pretty long time; but once someone has taken advantage of that grace for an unreasonable period, I start to get resentful and angry. And then I yell, because I’m mad and because it’s the only thing that seems to motivate her to finally follow through on the instruction.

To his credit, Dr. Rahman was very cool about these types of confessions. It probably helps that he works with a lot of families who are at the end of their ropes due to behavioral issues caused by a variety of factors including PANDAS. He managed not to be judgmental at all, rather was just interested in what the interaction looked like, as well as what was the final piece that would finally get the job done. In our case—as in a whole lot of other people’s, I learned—it was when I finally broke down and yelled.

What Dr. Rahman wanted us to do was to use a particular method for giving instructions that would get the same results as yelling. He explained that she knew she could blow me off and ignore my instructions until I got to the point of being personally offended enough to start hollering. The yelling was what gave her the sense of urgency she needed to get motivated. What he wanted us to do was to replace the entire above routine with something different that would create the same sense of urgency, but without the negative parts.

I was dubious. That certainly sounded like a bunch of fairy magic. But, we traveled thousands of miles to work with this guy, and our ask-ignore-remind-forget-yell-do method obviously wasn’t working. I had decided beforehand that I was going to put my trust in the professionals at the Rothman Center and to follow their advice to the letter. I don’t work much on “faith,” but I am most definitely a “hope” kind of person. I would do my best and hope it worked.

Because of Dot’s difficulties with anxiety and inattention, we were starting at square one. In order to get her to comply with requests, we had to take a different, simple approach. First of all, we had to stop with the multi-step instructions. Sure, a seven-year-old should be able to follow the logic of, “Put your towel in the hamper, get your pajamas on, and brush your teeth.” In fact, Dot could likely follow that, at least on a good day. The thing was, though, that we needed foolproof. We needed to set her up to succeed and to get used to succeeding.

So, it was important to give only one instruction at a time. Not only that, but the instruction needed to be very easy to follow. It had to be short, clear, and direct. Dr. Rahman suggested using the fewest number of words necessary. Whenever possible, the instruction should fall into the “to-do” category, focusing on what you want the child to do rather than what you don’t want her to do. (Instructing them to sit quietly rather than to stop yelling, for example.) In fact, Dr. Rahman’s instructions generally start out with the word, “I need you to…” because it pretty much eliminates other behaviors as options.

Interestingly, it’s also a good idea—at least when working to develop compliance—not to give unnecessary explanations. When asking/telling/pleading with Dot to pick up her shoes, I would explain that she needed to do it because it was a tripping hazard for her toddler sister, that they were wet and getting mud on the carpet, or so she could find them for school in the morning.

There are two problems with this. Actually, there are more than two, but there are two that I’ll mention. First of all, the kid already knows why I want her to pick up her shoes. It’s because THEY DON’T BELONG THERE. She is perfectly aware and knows what she should do. Secondly, I’m dealing with a kid who has attention issues. If I tell her to pick up her shoes and then give her a list of reasons why, by the time I get to the part where I’m whining about how unfair it is for everyone to expect me to pick up after them, she’s already moved on in her head. She needs to hear the instruction and then be able to act on it.

Now I will contradict myself. While I shouldn’t be causing a lag between the instruction and her beginning to follow it, I do actually need to give her a window of time in which to choose to comply.  This window is opened by me giving her the instruction, and it lasts for the amount of time it takes for me to count to ten. I make sure I have her attention, give the instruction, then count to ten. Ideally, it’s a silent thing. Sometimes I remind her by holding up the corresponding fingers. I may even count out loud if she isn’t looking at me and needs to be reminded that the clock is ticking. Dr. Rahman says that some kids get really annoyed by the counting, so parents will sometimes start off counting silently and start saying the numbers aloud when they get to six or so.

We had often had decent luck with getting the girls to do something by counting to three. With a background of getting compliance this way, going all the way to ten seemed a bit excessive. Like so many other times, though, the rationale behind it made perfect sense—once someone else pointed it out. When I really looked at it, I could see that the “one, two, three” thing was pretty much the same as yelling. We didn’t start counting until we were frustrated, so when it happened, they felt the right level of urgency to spur them into action.

The point of counting to ten at the very beginning of the process is to give the kid a chance to sort through emotions rather than having a knee-jerk reaction. When I ask Dot to go feed the cats, her first thought it probably something like, “I don’t want to feed the cat! I’m in the middle of something that’s way more fun than feeding the cat! I don’t want to stop what I’m doing, and I’m not gonna!” Hopefully, all of these objections are making their appearance in her mind while mine is just calmly thinking, “one…two…three…four.” While I continue counting to myself (or aloud, if needed), she has a chance for her thought process to follow a reasonable progression. While she might start out being ticked off that I want her to stop having fun and do something dreadful, once she’s had a moment to think about it, she can start to see that feeding the cat actually wouldn’t take that long and she could go right back to her activity when she was done. Yeah, and if she just got it done now, it’ll be over that much faster. 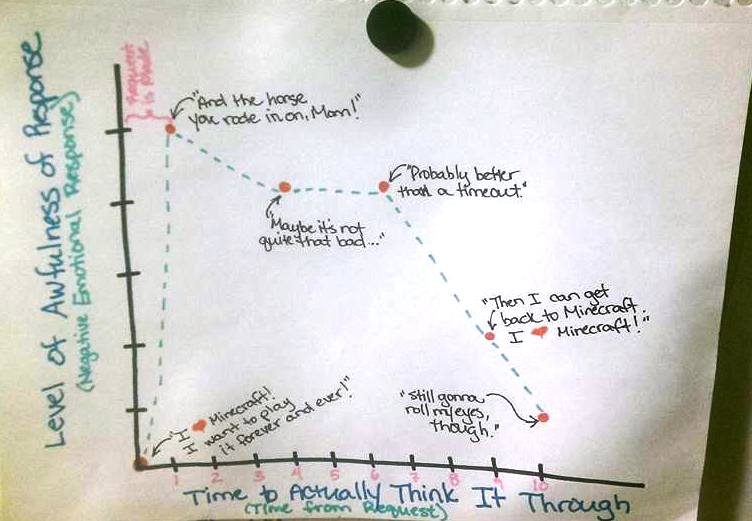 Let’s be realistic. Very few people with kids who have behavioral difficulties think that the above is what’s going to happen. I certainly didn’t. I think I actually laughed at the doctor. Again, I didn’t have a whole lot of faith that things were going to veer into this beautiful La-La Land he described, but doggone it did I HOPE they would!